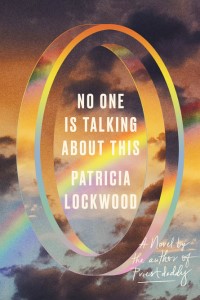 From the publisher: As this urgent, genre-defying book opens, a woman who has recently been elevated to prominence for her social media posts travels around the world to meet her adoring fans. She is overwhelmed by navigating the new language and etiquette of what she terms “the portal,” where she grapples with an unshakable conviction that a vast chorus of voices is now dictating her thoughts. When existential threats–from climate change and economic precariousness to the rise of an unnamed dictator and an epidemic of loneliness–begin to loom, she posts her way deeper into the portal’s void.

Novels about being Extremely Online have proven to be topical catnip for a bevy of diverse authors recently, perhaps peaking in 2021 after most of us lived lives of physical isolation — and consequently, of digital saturation — for the better part of a year. Into these waters wades Patricia Lockwood, an author who entered the literary consciousness with a raved-about poetry collection (Motherland Fatherland Homelandsexuals) and followed it up with a raved-about memoir (Priestdaddy). Boldly, she mixed things up again this year with the publication of a raved-about novel, No One Is Talking About This, which follows an unnamed woman who rises to Internet fame and embarks on international speaking tours on the strength of her social media posts, only to be caught off-guard by both trouble at home and a building existential crisis.

For an author as risk-willing and reinventive as Lockwood, a novel about the alternately humorous and horrific virtual realms that exist at our fingertips and in our minds would seem prime territory; her dexterity of language, evidenced through her contributions to poetry, narrative nonfiction, and now fiction, should only be a boon in tackling such material. And it is for a while: Lockwood establishes a world that feels at once recognizable (climate change, an unnamed demagogue, influencer culture) and slightly askew, flourishing her material and digital world with surreal touches. “The Portal” — which is ambiguously either an analog for a Reddit- or Twitter-type platform or more nebulously reflective of an amalgam of all such Internet communities — casts an ever-present, ominous pall over all here, proving both the source of the narrator’s fame and the catalyst for her psychological turmoil.

But all of this only works for a while. There’s no denying the heady probing that Lockwood takes on in No One is Talking About This, taking stock of how our current social media age both creates and collapses identity, troubling our very consciousness in the process. But her novel never fully focuses its gaze, content instead to tease fascinating philosophical inquiry without delivering much follow-through. The result is a work that lacks urgency — despite the publisher’s marketing claims to the contrary: “As this urgent, genre-defying book opens…” — and one that feels more meandering than anything. When trading in such ambiguity as a mode, the impetus is on the author to make sure that quality is more feature than bug: the best works of this kind find unsettled ideas gyring out into something grander than the component parts, but Lockwood is content to use this murkiness as a crutch; mere mood-making.

That’s not to say No One Is Talking About This is a total wash, but with Calvin Kasulke’s hilarious and delightfully wonky debut novel Several People Are Typing coming out in a few weeks, there just isn’t much to recommend tracking Lockwood’s title down at this point, even as it’s sure to end up on many Best Books of the Year lists a couple months from now.