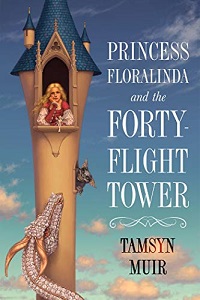 From the publisher: When the witch built the forty-flight tower, she made very sure to do the whole thing properly. Each flight contains a dreadful monster, ranging from a diamond-scaled dragon to a pack of slavering goblins. Should a prince battle his way to the top, he will be rewarded with a golden sword—and the lovely Princess Floralinda. But no prince has managed to conquer the first flight yet, let alone get to the fortieth. In fact, the supply of fresh princes seems to have quite dried up.

Those looking for a quick, easy fantasy read could do worse than Princess Floralinda and the Forty-Flight Tower. Author Tamsyn Muir made a name for herself with her debut novel Gideon the Ninth, a space opera-fantasy mashup that struck an appealing balance of brutal and outré, with a slick feminist feel. Her storytelling takes quite a different shape in Floralinda, but her fierce female vibes and tilt toward surprising, occasional brutality remain. Instead of high fantasy or science fiction, Muir pivots the world of fairy tales with her latest, a riff on the familiar “princess locked in a tower” trope, but here with a heroine who is self-sufficient, even sometimes bordering on manipulative, who takes charge of her own destiny. There’s also a witch, of course, and a fairy named Cobweb, which is obviously the best name for such a critter and how exactly has that not been done before?

Princess Floralinda and the Forty-Flight Tower is a short book, and so to say too much would spoil the small pleasures therein. It’s brevity is also its greatest weakness, as the book definitely feels more like a short story than a short novel. 150 pages is plenty of room to construct a novel, if done right, and it’s not as if Muir fails to do so here — it’s just to say that this was clearly never her intent. Instead, the story is a slight two-hander between Floralinda and Cobweb, built on their banter and developing relationship to each other, and that bit works well enough. But for fantasy readers, or those who like a little more texture to their settings, very little is done to flesh out the world, as Muir keeps things relegated to the the eponymous forty flights of the tower. Likewise, the creature work is fairly superficial, as familiar iterations of fantasy mainstays pop up without much consequence (or very loose, new creations, mostly in the form of mashing up two different animals or beasts).

For all that, Floralinda is diverting enough and at least doesn’t overstay its welcome. Muir possesses both a wicked and weirdo sense of humor, each getting its due at various points here. It’s not a book that much reinvents or deepens the fairy tale template, but it’s a harmless read that will amuse and surprise with enough regularity to keep your attention for its short page count.

Princess Floralinda and the Forty-Flight Tower is available for checkout at the Galesburg Public Library.