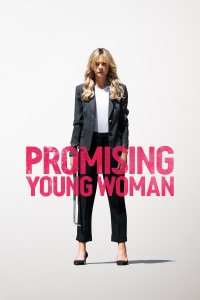 From the distributor: A young woman, traumatized by a tragic event in her past, seeks out vengeance against those who crossed her path.

This 2020 dramatic thriller stars Carey Mulligan as a medical school dropout that’s moved back into her parents’ house with little explanation and mostly keeps to herself. She daylights as a barista at a local coffee shop and spends her nights tricking men into thinking she’s too drunk to fend off their advances at various bars and clubs. She lets each one play the “nice guy” role and lead her home, only to snap out of her stupor and give them a scare before any assault on her can take place. It makes for some suspenseful, captivating scenes that ring a little too close to home for many young women. That said, a movie about date rape culture and its repercussions is the least acknowledgment victims and their families deserve, so it’s worth sitting through. Everyone’s heard the horror stories of what happens when you drink too much and have no one there to protect you, but what happens after? What becomes of those left to grieve a young woman’s robbed future?

Mulligan does a great job portraying a traumatized young woman attempting to feel some semblance of control over her life again. Even as she makes questionable and cringe-y decisions, it’s hard not to sympathize with her in every scene. Musical comedian Bo Burnham also shines in this, playing Cassie’s former classmate and new love interest Ryan. They attended medical school together, and growing closer now inevitably prompts questions about what happened to make her leave. Will she be able to move forward without going back?

Overall I definitely enjoyed the film. The last 30 or so minutes take a turn you likely won’t expect from the first section of the film, and, though I’m left with questions, it does represent the most realistic outcome for people that actually go through trauma like this. I’d recommend Promising Young Woman to fans of suspense and realistic thrillers that border on horror.

Promising Young Woman is available for checkout at the Galesburg Public Library on DVD.