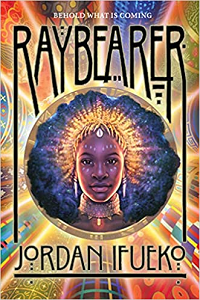 From the publisher: Fans of Sabaa Tahir and Tomi Adeyemi won’t want to miss this instant New York Times bestselling fantasy from breakout YA sensation Jordan Ifueko! Nothing is more important than loyalty. But what if you’ve sworn to protect the one you were born to destroy?

Raybearer is the story of Tarisai, a girl raised in an invisible home with no one but private tutors and a mysterious mother known as the Lady, who she sees only once or twice a year. One day, the Lady tells Tarisai that she being sent to the capital of the empire to meet Crown Prince Ekundayo, where she’ll have a chance to join his Council of Eleven, the children who will make up his future ruling council and whose magical bond protects the prince from all outside harm. However, the Lady also gives Tarisai one last thing: a magically-compelled order (thanks to a wish from a genie-like being called an Ehru): once Tarisai has grown close to the future emperor, gained his love and trust, she must murder him.

Thus begins the setup for a really cool adventure set in an African-inspired fantasy setting. While fans of YA fantasy will find some familiar ground here (a brave but conflicted heroine must use her powers and her wits to overcome an evil destiny set upon her), there’s a lot of uniqueness to find here as well. The diverse cast includes some strong secondary characters such as Prince Dayo and of Tarisai’s friends named Sanjeet and Kirah. The world Jordan Ifueko creates is richly detailed and full of a unique but easily understandable mythology.

My favorite thing about Raybearer though is that in addition to exciting adventures and cool magical powers, the story contains thought-provoking situations and interesting conflicts for Tarisai. Her responsibilities in the imperial court lead to her having to address some issues of politics and social justice that, while relevant to the modern world, also don’t feel like the author is lecturing readers.

Overall, Raybearer is a fun, exciting read that should appeal to all fans of Young Adult fantasy, as well as readers who want to see a smart, brave black girl struggle to carve out her own destiny in the world.

Raybearer is available for checkout at the Galesburg Public Library. It is available in print and Playaway audiobook format.