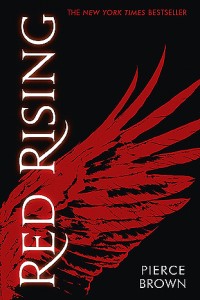 From the publisher: Darrow is a Red, a member of the lowest caste in the color-coded society of the future. Like his fellow Reds, he works all day, believing that he and his people are making the surface of Mars livable for future generations. But soon he discovers that humanity reached the surface generations ago. Darrow—and Reds like him—are nothing more than slaves to a decadent ruling class. Inspired by a longing for justice and the memory of lost love, Darrow sacrifices everything to infiltrate the proving ground for the dominant Gold caste.  There, he will stop at nothing to bring down his enemies… even if it means he has to become one of them to do so.

Red Rising came out in 2014, and I’ve been wanting to read it for some time. Although not as good as The Hunger Games series by Suzanne Collins, it is very much in the same vein. Set in a dystopian Earth future, complete with Roman names and a violent Game played by teenagers. I can imagine a future in which humans have colonized Mars and where society has a huge divide between the upper and lower classes. I found it harder to imagine a future where we have genetically altered ourselves so that we physically manifest the color of our class.

Main character Darrow is not the most sympathetic of characters. As he infiltrates the Gold class he becomes more and more like them. He is largely driven by the unnecessary death of his wife Eo, and I also found it hard to buy that she would martyr herself at 16 with little fanfare. (This is not much of a spoiler — it happens in the first five chapters.)

Red Rising is violent and brutal. I set aside my skepticism of someone engineered to be Red being forcibly turned Gold and followed the story. There is a lot of action. Darrow is the narrator and despite many harrowing plot twists, I never doubted that he would survive and conquer. There’s a huge cast of characters but the author does a good job of giving them distinguishing features.

There is a lot of story left to tell after Red Rising — two immediate sequels to form one trilogy and two more books set later after that. One good thing about dragging your feet on a series is that all of the books may be out by the time you begin.

Red Rising is available for checkout at the Galesburg Public Library. It is also available as an ebook.