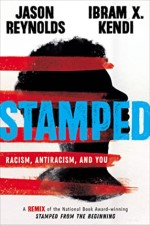 STAMPED: RACISM, ANTIRACISM, AND YOU by Jason Reynolds

A remix of the National Book Award-winning Stamped from the Beginning for ages 12 and up. This is NOT a history book. This is a book about the here and now. A book to help us better understand why we are where we are. A book about race.

The construct of race has always been used to gain and keep power, to create dynamics that separate and silence. This is a remarkable reimagining of Dr. Ibram X. Kendi’s Stamped from the Beginning, winner of a National Book Award. It reveals the history of racist ideas in America and inspires hope for an antiracist future.

Stamped takes you on a race journey from then to now, shows you why we feel how we feel, and why the poison of racism lingers. It also proves that while racist ideas have always been easy to fabricate and distribute, they can also be discredited. 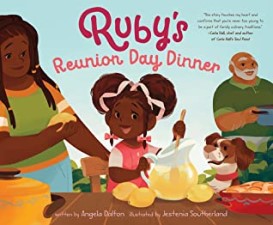 Once a year, each of Ruby’s relatives prepares a special dish to share at their family reunion. Daddy calls it their “signature dish”—and Ruby wants one of her own. She wanders through the bustling kitchen looking for inspiration. As she watches Pop-Pop’s chicken sizzling in the skillet, Uncle G slicing onions, and Auntie Billie cooking corn on the hot grill, she wonders if she’s just too young to have a signature dish. That’s when she finds it— the perfect solution!

Angela Dalton’s warm text is perfectly paired with Jestenia Southerland’s beautiful art in this sweet picture book, filled with the tenderness and warmth of this multigenerational extended family and the food they share. 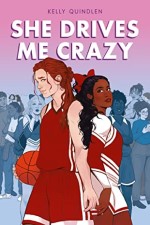 SHE DRIVES ME CRAZY by Kelly Quindlen

After losing spectacularly to her ex-girlfriend in their first game since their break up, Scottie Zajac gets into a fender bender with the worst possible person: her nemesis, the incredibly beautiful and incredibly mean Irene Abraham. Things only get worse when their nosey, do-gooder moms get involved and the girls are forced to carpool together until Irene’s car gets out of the shop.

Their bumpy start only gets bumpier the more time they spend together. But when an opportunity presents itself for Scottie to get back at her toxic ex (and climb her school’s social ladder at the same time), she bribes Irene into playing along. Hijinks, heartbreak, and gay fake-dating scheme for the ages. From author Kelly Quindlen comes a new laugh-out-loud romp through the ups and downs of teen romance. 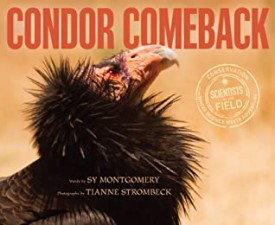 In April of 1987 the last wild California condor was captured and taken to live in captivity like the other twenty-six remaining birds of its kind. Many thought that the days were over of of this remarkable, distinguished bird that had roamed the skies of North and Central American for thousands of years.

Sy Montgomery employs her skill for on-the-ground reporting, shrewd observation, and stunning narrative prose to detail the efforts of scientists, volunteers, and everyday citizens to get California condors back in the wild. In particular, Montgomery profiles employees at the Santa Barbara Zoo who have worked tirelessly to raise abandoned chicks, nurse sick birds back to health, and conduct research that can support legislation to ban what is probably the largest threat to the existence of the wild condor: lead bullets. In turns affectionate and frustrated, hopeful and heartbreaking, Montgomery’s powerful prose does justice to these ancient, sociable, and elegant creatures. 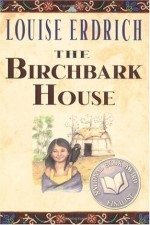 THE BIRCHBARK HOUSE by Louise Erdrich

Nineteenth-century American pioneer life was introduced to thousands of young readers by Laura Ingalls Wilder’s beloved Little House books. With The Birchbark House, award-winning author Louise Erdrich’s first novel for young readers, this same slice of history is seen through the eyes of the spirited, 7-year-old Ojibwa girl Omakayas, or Little Frog, so named because her first step was a hop. The sole survivor of a smallpox epidemic on Spirit Island, Omakayas, then only a baby girl, was rescued by a fearless woman named Tallow and welcomed into an Ojibwa family on Lake Superior’s Madeline Island, the Island of the Golden-Breasted Woodpecker. We follow Omakayas and her adopted family through a cycle of four seasons in 1847, including the winter, when a historically documented outbreak of smallpox overtook the island.

July’s staff picks come from Meghan, who works in the Children’s Room. All book descriptions are courtesy of the publisher.