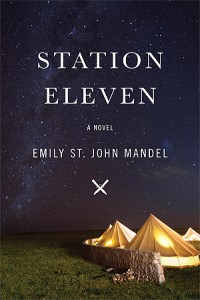 From the publisher: One snowy night a famous Hollywood actor slumps over and dies onstage during a production of King Lear. Hours later, the world as we know it begins to dissolve. Moving back and forth in time—from the actor’s early days as a film star to fifteen years in the future, when a theater troupe known as the Traveling Symphony roams the wasteland of what remains—this suspenseful, elegiac, spellbinding novel charts the strange twists of fate that connect five people: the actor, the man who tried to save him, the actor’s first wife, his oldest friend, and a young actress with the Traveling Symphony, caught in the crosshairs of a dangerous self-proclaimed prophet.

“Jeevan was crushed by a sudden certainty that this was it, that this illness Hua was describing was going to be the divide between a before and an after, a line drawn through his life.”

In the midst of 2022, it’s hard not to think of life in terms of before and after. Many of us spend time yearning for those days before March 2020, when we didn’t know just how much our lives were about to be different in the after. This sense of before and after permeates Emily St. John Mandel’s Station Eleven, a novel about a highly contagious respiratory virus drastically changing the lives of everyone on earth — sound familiar?

In Station Eleven, a loosely related cast of characters deals mostly with the after, carving out lives in the wasteland that has become post-pandemic Earth. While COVID has been ravaging our lives for two years, the pandemic in Station Eleven takes over in only a few days. Among a diverse cast of characters, there’s Arthur, a Hollywood actor who dies of a heart attack on stage just as the illness takes hold of the world; Jeevan, a man in the audience who tries to save Arthur’s life, and who holes up with his brother in Chicago when the virus strikes; Kirsten, an eight-year-old actress in the show who, in the after, performs with the Traveling Symphony, a group that travels around Michigan performing for the remaining survivor communities; and Clark, Arthur’s former best friend who lucks out by getting stuck in a remote airport with a small group who make a life there, eventually creating the Museum of Civilization — a shrine to the before.

St. John Mandel spreads the details of these characters’ lives much like the mysterious swine flu spreads throughout the world in the novel — first little by little, then all at once. By switching between timelines and characters’ perspectives, she describes the tragedy of life in both the before and after, and how in many ways they aren’t so different after all. But St. John Mandel’s true talent lies more in what she doesn’t say, leaving the most interesting details and connections open to reader interpretation. Some readers will be frustrated by the lack of a tidy ending, but in the after, little is tidy.

Station Eleven is available for checkout from the Galesburg Public Library. It has also been turned into a miniseries currently airing on HBO Max.