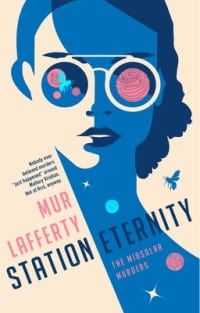 From the publisher: From idyllic small towns to claustrophobic urban landscapes, Mallory Viridian is constantly embroiled in murder cases that only she has the insight to solve. But outside of a classic mystery novel, being surrounded by death doesn’t make you a charming amateur detective, it makes you a suspect and a social pariah. So when Mallory gets the opportunity to take refuge on a sentient space station, she thinks she has the solution. Surely the murders will stop if her only company is alien beings. At first her new existence is peacefully quiet…and markedly devoid of homicide. But when the station agrees to allow additional human guests, Mallory knows the break from her peculiar reality is over….

Station Eternity is quirky and fun. It reminded me of Year Zero by Rob Reid – another fun romp involving aliens, where homo sapiens are not All That. And I love the idea that someone who keeps solving murders finally gets called out. Don’t tell me people wouldn’t have been suspicious of Miss Jane Marple, always stumbling across dead bodies and pointing the finger at the murderer.

It took me awhile to get into the flow of this book. There are not only a lot of characters but many of them are aliens, and very different aliens. I loved the Sundry, a hivemind of wasps that are always gathering information about everything. None of the alien races are too impressed with humans because we don’t form symbiotic relationships with other species. I love this quote about Earth’s First Contact with aliens: “The world governments had attended many meetings, trying to learn about the different aliens in the universe and whether they were threats. They weren’t, but mostly in the sense that humans aren’t an aggressive threat to ants but could squash them if they wanted to.” (chapter 4 of the advance reader copy)

It was hard to follow the action sometimes, because so much is going on. But it isn’t really necessary to follow all the action, so I didn’t stress. I learned a new word! “Sidereal,” meaning of or with respect to the distant stars, not the sun or planets. This book will appeal to those who like a sense of whimsy and a break from doom and gloom in their science fiction. It is billed as book one in a series, and I look forward to book two.

I read an advance reader copy of Station Eternity from Netgalley.

Station Eternity is available for checkout from the Galesburg Public Library in print and as an ebook.