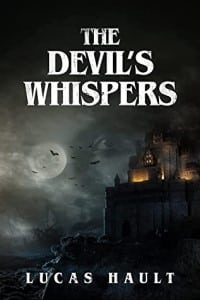 From the publisher: Famed British lawyer Gerard Woodward is summoned to an ancient Welsh castle to assist a dying lord in his final affairs. But as his host slips closer to death, Gerard begins to feel less like a guest and more like a prisoner. When he finds himself locked inside his room, he realizes he must escape.

Famous lawyer Gerard Woodward must go to a Welsh castle to settle the final affairs of wealthy Lord Mathers. While he is there, he witnesses horrific things— an ape-like creature disappearing into the shadows, a beautiful woman who only appears at night, and a person scaling the castle walls like a lizard. While Gerard is in Wales witnessing these terrible things, his fiancee Raelyn impatiently awaits his return in London. When children start disappearing, animals are being brutally murdered, and her cousin Nathan starts behaving strangely, Raelyn becomes increasingly desparate to hear from Gerard.

Told via journal entries and letters, Lucas Hault’s new novel is a twist on the classic Dracula. Though this format makes the book an overall quick read, it perhaps contributes to the meandering, drawn-out feel of the plot as multiple days can pass before a narrator updates their journal or receives a letter. Hault does a nice job of utilizing white space and page breaks to show that time has passed since the narrator’s last entry— much like a real journal writer uses.

Hault also does a good job of setting scenes with spooky descriptions. Eerie and gothic moments abound, but to call this a “horror” novel does feel like a bit of a stretch. For me, this book’s major downfall is the characters. They are all so one-dimensional they’re unrealistic and unrelatable. Gerard’s only concern is Raelyn; Raelyn is known only for her piety and her love for Gerard. Because of this, in addition to dialogue that is sometimes awkward, it’s hard to sympathize with the characters.

Gothic horror fans will appreciate the nods to Dracula; newcomers to the genre will enjoy dipping their toes into a spooky story with paranormal happenings. Overall, this was an entertaining read.

The Devil’s Whispers is available for checkout from the Galesburg Public Library.