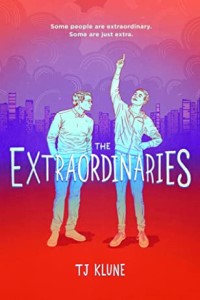 From the publisher: Some people are extraordinary. Some are just extra. New York Times and USA Today bestselling author TJ Klune’s YA debut, The Extraordinaries, is a queer coming-of-age story about a fanboy with ADHD and the heroes he loves.

The Extraordinaries carefully walks the line between cliché-filled cringefest and awkwardly adorable teen romance. And by “walks the line,” I mean it steps right up to the line, scoops it into a giant hug, and asks it to go dancing. This book gleefully embraces every tired cliché in the genre and milks them for as much awkward humor and drama as possible.

Nick is a gay teen with ADHD whose crush on local superhero Shadow Star is so strong that he writes fanfiction about it. Much like stereotypical fanfiction, it’s full of corny dialogue and shallow wish fulfillment. Nick’s friends tolerate this obsession because they genuinely love him, even if they’re annoyed that Nick remains oblivious to his best friend Seth’s equally powerful crush on him.

What follows is a romantic comedy that veers from melodrama to absurd humor and back again. Nick’s attempts to give himself superpowers (so that he can be with Shadow Star… and also protect his loved ones) get increasingly ridiculous, and the fallout from them had me chuckling while also facepalming in embarrassment.

The plot has several intentionally predictable twists. Readers will figure them out almost immediately and then spend the rest of the book both laughing at and being frustrated with Nick for somehow not seeing what’s right in front of him. This is tricky to pull off, but the author did it well. The writing meanders a bit , but Klune captures the voice of a teen with ADHD quite well (which makes sense, given that he has ADHD himself).

This book caused some controversy on release, which I think is worth addressing. Nick’s dad is a cop who was demoted for punching someone during an interrogation. The book portrays this as wrong but understandable, because his wife (Nick’s mom) had recently died and the suspect taunted him about it. Police in general are portrayed as good people in the book. This book was published about two months after the death of George Floyd, which was an especially unfortunate time for such a message. Klune posted an apology on his blog, and I understand that he rethought this portrayal in the sequel (though I have not read it).

The Extraordinaries may appeal to fans of Brandon Sanderson’s Steelheart and Rainbow Rowell’s Fangirl. It is available at Galesburg Public Library in the Young Adult section, and on Playaway in audio form.