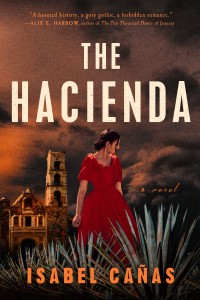 From the publisher: Mexican Gothic meets Rebecca in this debut supernatural suspense novel, set in the aftermath of the Mexican War of Independence, about a remote house, a sinister haunting, and the woman pulled into their clutches…

Disclaimer: I haven’t read Rebecca or Mexican Gothic (but I’ve got the ARC!). Regardless, I enjoyed this book immensely and immediately gave it five stars. I also knew next to nothing about the Mexican War of Independence before starting and was able to follow along without any issue.

After her father’s execution during the overthrow of the government, Beatriz is desperate to find a home again for herself and her mother. She eagerly accepts the proposal of the handsome Don Rodolfo Solórzano (over her mother’s objections) and moves to his hacienda in the countryside. There, the traditional Gothic elements begin to emerge. The rattling carriage ride up to the stately but neglected home. The suspicious servants. Things that go bump (and worse) in the night. The persistent and conflicting rumors surrounding the fate of the first Doña Solórzano (typhus? bandits?). Yes, there is absolutely running down the hallway in the middle of the night while wearing a flowing nightgown.

Isabel Cañas takes these beloved elements and firmly establishes them in a time and place we rarely get to read about. Thus we see the addition of racism, colorism, colonialism, the casta system, and the local priest dealing with balancing his eccleasastical learnings with his grandmother’s witchcraft. The limited time jumps and POV changes are handled well. There are a number of Spanish words introduced without definition, but they can all be parsed out from the context.

Although not out until next spring, The Hacienda is already generating a lot of buzz and I predict it will be incredibly popular once it comes out. I would love to see a movie version, if it can be done without the stereotypical haunted house jump scares. It’s hard to believe this is a debut novel.

Thank you so much to Berkley Publishing Group and NetGalley for the ARC!

The Hacienda will be available for checkout from the Galesburg Public Library after it is released in May 2022.