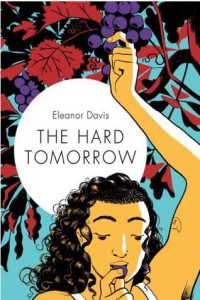 From the publisher: Hannah is a thirty-something wife, home-health worker, and antiwar activist. Her husband, Johnny, is a stay-at-home pothead working—or “working”—on building them a house before the winter chill sets in. They’re currently living and screwing in the back of a truck, hoping for a pregnancy, which seems like it will never come. Legs in the air, for a better chance at conception, Hannah scans fertility Reddits while Johnny dreams about propagating plants—kale, tomatoes—to ensure they have sufficient sustenance should the end times come, which, given their fragile democracy strained under the weight of a carceral state and the risk of horrible war, doesn’t seem so far off. Helping Hannah in her fight for the future is her best friend Gabby, a queer naturalist she idolizes and who adores her. Helping Johnny build the house is Tyler, an off-the-grid conspiracy theorist driven sick by his own cloudy notions of reality.

Those looking for a strong plot will have to look elsewhere, as this story is mostly character driven. Short episodic bursts with no chapter breaks or other distinctions sometimes make for rocky transitions. The reader wants to feel emotional for all of the difficult things the characters have to go through, but only Hannah is developed enough to make the emotional investment worthwhile.

While there is no central plot, a thread is woven throughout the story: Hannah and her husband are building a house and Hannah wants to have a baby. Progress is slow on these projects as her husband lacks her enthusiasm. In the meantime Davis begins a couple of politically charged subplots that include police raids, potential deportations, and the operation of a grassroots activist organization. However, these subplots aren’t brought to finite conclusions and the reader is left with questions.

Davis’ art is unique. Through the use of sparse detail, thin lines, and a black and white color scheme, Davis brings the focus to her characters and their dialogue. The dialogue is realistic enough; any awkwardness can be passed off as simply an awkward or difficult conversation (which we’re all too familiar with) or attributed to a character’s personality. Some scenes are charged with graphic content that squeamish readers should take note of: a man gets shot, characters have non-graphic sex, and there are some physical fights that include the use of tear gas between civilians and a police force.

Overall, the book feels just a little too short– too many loose ends were left untied, and after investing so much time with the characters, I wanted to feel more like the investment was worth it. However, Davis’ story is a slice of life that shows everybody has a story worth telling.

The Hard Tomorrow is available for checkout from the Galesburg Public Library.