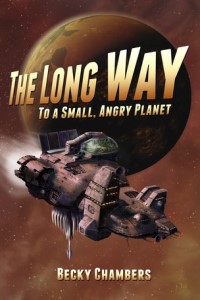 From the publisher: Follow a motley crew on an exciting journey through space—and one adventurous young explorer who discovers the meaning of family in the far reaches of the universe—in this light-hearted debut space opera from a rising sci-fi star.

Has the past year and a half-ish broken you into a thousand tiny pieces? Or beaten you down with so much heat and pressure that you wonder how in the world you haven’t turned into a diamond yet? Cool, me too. This book is the perfect warm-fuzzy-feeling-generator to combat that.

Follow up question: do you like to play the comparative suffering game? “I should quit whining and just be happy because other people have it a lot worse than I do.” Let me offer you a quote from these perfect pages at the 52% mark:

“If you have a fractured bone, and I’ve broken every bone in my body, does that make your fracture go away? Does it hurt you any less, knowing that I am in more pain? […] Feelings are relative. And at the root, they’re all the same, even if they grow from different experiences and exist on different scales.”

The characters are unique and [mostly] lovable, and they help each other learn and grow without coming across as a thinly veiled attempt from the author to blatantly condescend her readers. The Wayfarer’s crew is made of a bunch of different species, and the universe itself is most definitely not human-centric, although many of the characters the reader gets to experience are human. As you can probably guess, some species have different biases and/or stereotypes that they’re dealing with, but the refreshing thing about that is characters generally catch and correct themselves when they’re being unfairly judgmental. On the other hand, if they’re on the receiving end of cultural ignorance, they’re mostly patient in helping others understand where their knowledge falls short.

As far as plot goes, this is mostly episodic. I think we’re supposed to feel as though there’s a main event towards the end, but it happens so quickly that it seems to be more of crackle and fizz rather than an all-out explosion. But that doesn’t detract from the quality of the book, by any means. Chambers resolves tension almost as soon as she creates it in many of the episodes throughout, and that is a-ok with me.

The Long Way to a Small Angry Planet is available for checkout from the Galesburg Public Library.