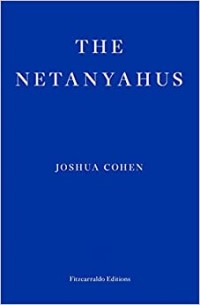 From the publisher: Corbin College, not-quite-upstate New York, winter 1959-1960: Ruben Blum, a Jewish historian – but not an historian of the Jews – is coopted onto a hiring committee to review the application of an exiled Israeli scholar specializing in the Spanish Inquisition. When Benzion Netanyahu shows up for an interview, family unexpectedly in tow, Blum plays the reluctant host, to guests who proceed to lay waste to his American complacencies. Mixing fiction with non-fiction, the campus novel with the lecture, The Netanyahus is a wildly inventive, genre-bending comedy of blending, identity, and politics.

The Netanyahus: An Account of a Minor and Ultimately Even Negligible Episode in the History of a Very Famous Family by Joshua Cohen won the Pulitzer Prize for fiction in 2022. This novel, for its expertness of craft and historical relevance will, I’m sure, become a staple in American literature and Jewish-American literature for decades to come.

The book was born from the friendship between author Joshua Cohen and the infamous literary critic, scholar, and author, Harold Bloom. The protagonist—Ruben Blum—is a transformed version of the real-life Bloom during the years he worked at Cornell College and was among the faculty on the hiring committee for none other than Benzion Netanyahu, the father of Binyamin Netanyahu, the longest-running prime minister of Israel who was deposed in 2021.

The novel, set in the 1950s, follows Blum, a history professor who specializes in the study of taxation throughout time, as he is asked to be on the hiring committee for Netanyahu because Blum is the only Jewish person on staff—or on campus, for that matter—at the fictional Corbin College. Blum throws himself obsessively into the study of Netanyahu’s past work, a work that adopts liberal interpretations of historical fact, as well as a propagandist bent on the future of Judaism and Jewish people. Holing up in his study nightly to read, Blum struggles to interpret the needs of his pubescent daughter Judy and wife Edith as the three of them balance two sets of grandparents, faculty functions at the college, dramatic injuries, the wonders of color TV, and an extremely chaotic visit from the whole Netanyahu family.

The Netanyahus is brilliantly-written, able to capture the dry bureaucratic voice of college administration, the hilarity of family visits, the politics of politeness, all in the first-person voice of Blum.

At times, I found myself looking up references to various moments in history, but rather than distract me from the book, it merely enhanced my reading experience. At times, too, I had to read slowly to follow the logic of passages replicating Netanyahu’s and Blum’s lectures, but this slowness came to me as a nice refresher—too many times, I catch myself reading to finish a book rather than enjoy it. This book demands enjoyment and at times is so dense that close attention is the only way that enjoyment can be achieved.

Taffy Brodesser-Akner’s review of the novel in The New York Times reads, “It is an infuriating, frustrating, pretentious piece of work—and also absorbing, delightful, hilarious, breathtaking and the best and most relevant novel I’ve read in what feels like forever.” I found this to be totally true.

The Netanyahus is available for checkout from the Galesburg Public Library.