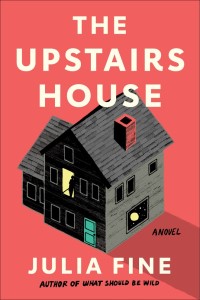 The Upstairs House is Julia Fine’s second novel, although it’s the first of hers that I’ve read. But by golly, I’m going to go pick up her first one now because this was so hard to put down, it should have been titled anti-gravity (get it? Because I couldn’t put it down?). Fine’s depiction of early motherhood and postpartum psychosis is stomach-churning and it feels so real–I’ve never had kids, never really wanted kids, and yet I felt a connection to this character. Fine did such a fine job (hehe) of showing Megan’s fear and anxiety regarding motherhood and its effects on the idea of selfhood or a sense of identity.

Initially I picked this one up because it had been described as a ghost story. And on the most basic level, that’s what it is. Megan discovers a mysterious teal door upstairs, and Margaret Wise Brown (author of Goodnight, Moon and the subject of Margaret’s dissertation) is the ghost behind it. When Margaret’s lover Michael Strange (Blanche Oelrichs’s nom de plume) shows up, things start to become a little more dangerous for Megan and her newborn daughter.

But it is so much more than just a superficial ghost story. Fine herself was a new parent at the time of writing, which most definitely contributed to the authenticity of the anxiety and fear of Megan’s postpartum transition period. Through Margaret and Michael, you can see a struggle between a former self and a new self, between independence and codependency, between love and disgust. It’s a desperate balancing act. Margaret and Michael reflect Megan’s fourth trimester experience in unsettling and frightening ways.

The Upstairs House is available for checkout at the Galesburg Public Library.