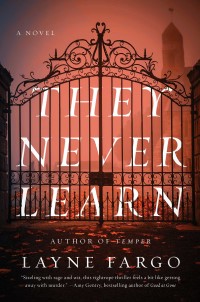 From the publisher: Scarlett Clark is an exceptional English professor. But she’s even better at getting away with murder.

Every year, Dr. Clark searches for the worst man at Gorman University—professor, student, or otherwise—and plots his well-deserved demise. Thanks to her meticulous planning, she’s avoided drawing attention to herself…but as she’s preparing for her biggest kill yet, the school starts probing into the growing body count on campus. Determined to keep her enemies close, Dr. Clark insinuates herself into the investigation and charms the woman in charge. Everything’s going according to her master plan…until she loses control with her latest victim, putting her secret life at risk of exposure.

Meanwhile, Gorman student Carly Schiller is just trying to survive her freshman year. Finally free of her emotionally abusive father, all Carly wants is to focus on her studies and fade into the background. Her new roommate has other ideas. Allison Hadley is cool and confident—everything Carly wishes she could be—and the two girls quickly form an intense friendship. So when Allison is sexually assaulted at a party, Carly becomes obsessed with making the attacker pay…and turning her fantasies about revenge into a reality.

Oh, no…. You know that feeling when you laugh at a thing that you know you’re not supposed to find funny? (You’re probably a much better human than I am, and you can’t relate to that feeling, but just pretend you know what I’m talking about.) That’s kind of how I felt about Fargo’s sophomore novel here. Should I really be rooting for women who murder men who take advantage of women? Murder is wrong, I know, but it was so hard not to cheer them on!

Fargo is the co-creator of the podcast Unlikeable Female Characters, if that gives you any clues as to what to expect. In an article she wrote for CrimeReads in conjunction with her co-host, Wendy Heard, she openly admits the challenges that she faced in her early drafts because she had created a character who was so well-versed in the ways of staging her murders as accidents or suicides. Fargo had to start thinking like a serial killer, and she couldn’t just use the tropey cop-out (hah) of small town cops being inept. Crime readers are picky–as Heard said, “It’s important to remember that criminals in real life are stupid, but your criminals in books aren’t allowed to be stupid. People won’t tolerate it.”

The chapters oscillate between Carly’s POV and Scarlett’s POV and are generally snack-sized-short, which makes for a quick read. Fargo’s attention to detail brings the flavor to those snacks, though, and pretty soon that whole bag of Cool Ranch Doritos is gone in one sitting. Oops.

Scarlett and Carly are both bisexual, so there’s an added bonus for a little bit of non-hetero representation.

Look, I gotta be honest. It felt good to read this. People have to deal with creeps. It happens. A lot. You can’t knock ‘em out, you can’t walk away, etc. (thanks, Lily Allen), but you can read about their untimely demise at the hands of a wronged woman.