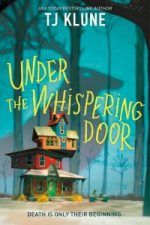 From the publisher: When a reaper comes to collect Wallace Price from his own funeral, Wallace suspects he might really be dead. Instead of leading him directly to the afterlife, the reaper takes him to a small village. On the outskirts, off the path through the woods, tucked between mountains, is a particular tea shop, run by a man named Hugo. Hugo is the tea shop’s owner to locals, and the ferryman to souls who need to cross over.

But Wallace isn’t ready to abandon the life he barely lived. With Hugo’s help he finally starts to learn about all the things he missed in life.

Wallace Price is dead. After spending 40 years of life devoting everything to work (at the expense of his marriage) and thinking only of himself, he had a heart attack and died on the floor of his office. The worst part? It was the weekend, so he wasn’t even wearing a suit. Wallace, now a ghost, attends his own funeral, where he meets Mei, a Reaper sent to collect him and bring him to Charon’s Crossing, a tea shop set deep in the mountains away from the city. The shop is run by Hugo, a ferryman, whose job is to help souls cross over.

If this sounds like a lot, it is. Under the Whisper Door has fantasy, LGBT romance, a ghost dog, and much, much more. Klune has called the book as “a comedy about grief,” and that’s an apt description. Written to help Klune process his grief after losing a partner who passed away early in life, the book examines the stages of grief with a welcome sense of realness that is often missing from such titles.

Despite some unbelievably quick character development and a few too many platitudes (“If we worry about the little things all the time, we run the risk of missing the bigger things.”), Under the Whispering Door, is a welcomingly diverse and fun title that tackles the reality of life, death, and what comes next.

If you enjoyed Fredrik Backman’s A Man Called Ove, or Matt Haig’s The Midnight Library, then Under the Whispering Door should be next on your list.

Under the Whispering Door is available for checkout at the Galesburg Public Library.