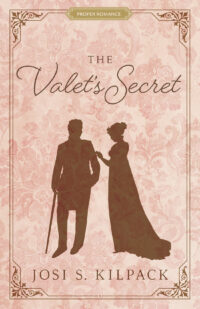 From the publisher: A passionate kiss from a handsome valet becomes a Regency Cinderella story when he is revealed to be an earl.

What a delight! It’s not often that a historical romance leaves me guessing as much as this one did. There are big obstacles to the romance, and I wondered how the author would work through them. But she did so in a way I found charming and satisfactory.

Kenneth has unexpectedly become the heir to an earldom. Rebecca is an educated woman but the daughter of an artist and a former servant in a great house. They meet when he nearly runs her down on a rented horse. He is in disguise as his valet so he can ride with abandon without being scolded by his uncle the earl. After an unpleasant interaction with her abusive father, Rose is out enjoying a simple walk.

Their attraction is instantaneous. Kenneth knows he is wrong to encourage Rebecca when she erroneously believes he is a servant, and yet he can’t help himself. The author does not spin out the misunderstanding for long, and when Rebecca learns the truth she is angry. One of my favorite scenes involves her pelting Kenneth with last year’s walnuts.

A romance between these two people from different classes during the Regency era is far-fetched, but the author sells it. She made it happen for her characters, and I believed it. I love that the hero and heroine are middle-aged. Both are widowed. Both have grown children. Kenneth is balding. Rebecca has fine lines around her eyes. They are mature people with self-confidence and pride. No silly waffling or posturing. I couldn’t help but root for their happily ever after.

This is a gentle read, with no swearing or sex, and the author appears to have done her research about the times. If you enjoy historical romance and think mature men and women deserve to find happiness in love as much as young people do, you might enjoy The Valet’s Secret.

I read an advance reader copy from Netgalley. The Valet’s Secret is scheduled to be published in early March 2022 and will be available for checkout from the Galesburg Public Library.