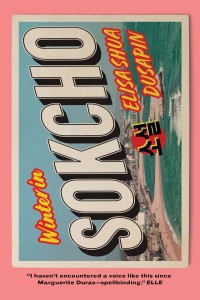 From the publisher: It’s winter in Sokcho, a tourist town on the border between South and North Korea. A young French Korean woman works as a receptionist in a tired guesthouse. One evening, an unexpected guest arrives: a French cartoonist determined to find inspiration in this desolate landscape. The two form an uneasy relationship. When she agrees to accompany him on trips to discover an “authentic” Korea, they visit snowy mountaintops and dramatic waterfalls, and cross into North Korea. As she’s pulled into his vision and taken in by his drawings, she strikes upon a way to finally be seen. An exquisitely-crafted debut, which won the Prix Robert Walser, Winter in Sokcho is a novel about shared identities and divided selves, vision and blindness, intimacy and alienation. Elisa Shua Dusapin’s voice is distinctive and unmistakable.

Translated from French by Aneesa Abbas Higgins, Winter in Sokcho reads almost like poetry–you feel as though every word fought for its place, and the images and emotions Dusapin is able to evoke in so few words is incredible. I can’t even imagine how beautiful this is in its original language.

Sokcho is a tourist town, but during the winter, traffic is slow. The unnamed main character works at a guest house and very obviously has an eating disorder, and the tension between this fact and the descriptions of the fish markets and cuisine sets the reader up for a grimace-inducing, uncomfortable time. Although when you look at the novel as a whole, the eating disorder seems like it’s almost brushed aside.

The main source of tension is Kerrand, a French graphic novelist who arrives in search of inspiration via an insider’s view of Sokcho, and he develops a somewhat awkward and strained relationship with the narrator. The narrator wants to be truly seen by this stranger, but he can’t even “see” the Sokcho that she’s shown him, instead romanticizing from his Western point of view. This is a permeative theme woven into almost every character–from the guest who’s recovering from extensive plastic surgery to the crummy boyfriend obsessed with modeling. How is our identity affected by others’ perception of us? Dusapin, I think, tries to show us.

The good news (?) is that this is the kind of novel where you will probably get a completely different message than I did. It feels like there are a ton of layers to peel up, each one just as complex as the last. It’s a good candidate for a re-read, that’s for sure.

Winter in Sokcho is available for checkout at the Galesburg Public Library.