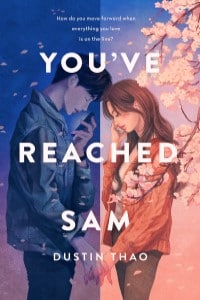 From the publisher: If I Stay meets Your Name in Dustin Thao’s You’ve Reached Sam, a heartfelt novel about love and loss and what it means to say goodbye.

Seventeen-year-old Julie Clarke has her future all planned out―move out of her small town with her boyfriend Sam, attend college in the city; spend a summer in Japan. But then Sam dies. And everything changes.

I’ve been looking forward to reading this one ever since I heard about it, because I was absolutely in love with the premise: what if you lost a loved one, but found that you could somehow still speak to them?

After Julie’s boyfriend Sam dies in a car crash, she mourns him privately for a week – skipping school, ignoring all calls and texts, and even missing his funeral. Finally, desperate to hear his voice one more time even if it’s just on voicemail, Julie calls Sam’s phone… and he picks up. Even though Sam is dead, Julie is able to call him up whenever she wants and have real conversations with him.

Overall, I liked this quite a bit. I don’t normally read a lot of tearjerker stories, but I’m a sucker for YA with a unique premise and this book definitely delivers that. I found Julie, Sam, and most of their friends to be interesting and well-rounded characters, and the romance felt genuine and heartwarming without being sickeningly sweet or melodramatic.

A few minor parts of the story felt inauthentic, such as Julie’s teacher refusing to accept late homework a mere week after her boyfriend’s death, or Julie letting herself into Sam’s house and helping herself to a couple of his belongings with no apparent repercussions, but I found these to be minor distractions from the otherwise engaging story. Julie was sometimes frustratingly self-absorbed, but I can actually relate to that particularly when grieving, so it didn’t detract from the story for me.

I don’t see myself rereading this book but I would definitely read other novels from Dustin Thao, and would recommend this to anyone who enjoys melancholy but hopeful YA novels.

You’ve Reached Sam is available at Galesburg Public Library in our Young Adult collection, in audio Playaway format, and as an ebook through the Libby app.