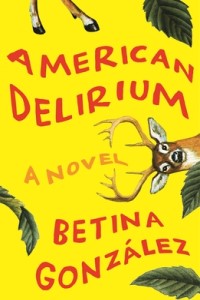 From the Publisher: From award-winning novelist Argentine Betina González comes a dizzying, luminous English-language debut about an American town overrun by a mysterious hallucinogen and the collision of three unexpected characters through the mayhem.

If you’re the kind of reader who needs a plot with lots of action, steer clear. I mean, yeah, the deer have all gone wacko and are attacking people, and people are “dropping out” of society and living in the woods, but this isn’t action-packed by any means. But if you’re okay with stewing in the discomfort of your own inevitable aging or the nagging need to escape anything and/or everything? Yeah, pick this one up. Although, probably don’t pick this up if you’re sensitive to animal cruelty, because one of the very first scenes was really hard to get through. And if you have a hard time when chapters switch between characters’ points of view… maybe skip this one. Each character’s voice is pretty distinct, but it took me a little while to get used to and keep track of the who’s and what’s.

Here’s some of the story: the hallucinogenic [fictional] plant albaria has been mystifying folks for actual generations. And that is, of course, what ties each of the three little strands of story together here. There’s Beryl, an ex-hippie who’s training up her fellow retirees to track and kill the deer that have been attacking people. There’s Vik, a sickly taxidermist who’s doing a little tracking of his own–he’s set up security cameras to catch the woman living in his closet. And then there’s Berenice, a child whose mother abandoned her to live as a “dropout” in the woods, so now Berenice is tracking down somebody, anybody, to play the part of care-taking relative. Lots of tracking and/or searching going on!

The best thing about this book is that considering the absolute absurdity of everything they do, the characters are actually pretty realistic. (Because people are absurd in real life, too!) They’re almost heartbreakingly realistic. They’re confused, they’re dissatisfied, they’re scared. They’re awkward. They’re most definitely not perfect. I tend to go for the unlikeable characters–you know, they’re the most interesting, but also the most relatable–and these were not super likeable, so A+ to Gonzalez.

When all is said and done, sure, this book is bonkers. But it’s also lovely and uncomfortable, and it’s a good little peek into some of the things we all worry about now and then (or all the time) and what sets us up with a common denominator.

American Delirium is available for checkout at the Galesburg Public Library.