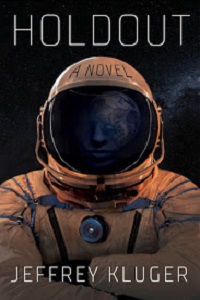 From the publisher: When evil forces are going unchecked on Earth, a principled astronaut makes a spilt-second decision to try to seek justice in the only place she knows how—the International Space Station.

The science in Holdout is good; Jeffrey Kluger is also the co-author, with astronaut Jim Lovell, of Lost Moon: The Perilous Voyage of Apollo 13, which was the basis of the Apollo 13 movie released in 1995, and nine other books. The author worked fictional versions of real space incidents into the plot. I really enjoyed the descriptions of life and work in space, and the relationship between the Russian and American astronauts. Although it’s a minor plot point, I also liked the main character’s concern for the mice that were in space with her. 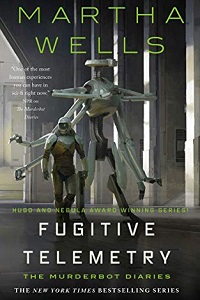 From the publisher:  The New York Times bestselling security droid with a heart (though it wouldn’t admit it!) is back in Fugitive Telemetry! Having captured the hearts of readers across the globe, Murderbot has also established Martha Wells as one of the great SF writers of today.

Murderbot is a rogue cyborg Security Unit doing adventures in space. I love Murderbot and eagerly look forward to each new adventure. I started Fugitive Telemetry, then I put it down and re-read the first four Diaries before continuing. I didn’t love Fugitive Telemetry quite as much as I did Rogue Protocol and Exit Strategy, but it’s a solid 4.5 stars for me. Not enough interaction with SecUnit’s “human friends” for my liking, but I especially…