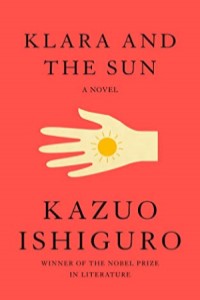 From her place in the store, Klara, an Artificial Friend with outstanding observational qualities, watches carefully the behavior of those who come in to browse, and of those who pass on the street outside. She remains hopeful that a customer will soon choose her, but when the possibility emerges that her circumstances may change forever, Klara is warned not to invest too much in the promises of humans.

Klara and the Sun topped many “Best Books of 2021” lists, including ours. One should expect no less from Kazuo Ishiguro, winner of the Nobel Prize in Literature. I loved reading this book very much: like many of Ishiguro’s novels, Klara and the Sun suspended its sense of mystery until the very end, even beyond it. I found, however, that the novel didn’t pull me in in the way that many of Ishiguro’s earlier works do.

Ishiguro’s narration style is unlike any other I’ve read. When I read The Remains of the Day for the first time last summer, I was frustrated that I had to go about my day instead of curl up with the book. I thought about the story constantly, and, as soon as I finished it, I found myself nostalgic for the experience of reading it for the first time again. Same with Never Let Me Go. The poised mysteries of these novels, revealed slowly and only, it feels, through great attention, that Ishiguro crafts so patiently sucked me right in. These are the kinds of books that you end up reading in four or six hour sittings, looking up only because the sun has set and you’ve forgotten to turn on the lamp.

This is the Ishiguro I knew before picking up Klara and the Sun. I was wary of the premise. The book sounded, on its surface, to have the potential to be similar in theme to Never Let Me Go, but Never Let Me Go is, in my humble opinion, a perfect book already. How could Ishiguro expand on ideas he’d already explored so deeply, so well?

Klara and the Sun tells the story of Klara, an Artificial Friend tasked with learning, through her AI software, how to be the best caretaker of her appointed companion Josie. Josie is a complicated, spunky human girl who loves Klara’s company. Josie, however, is sick. Klara struggles with how to take care of her ailing friend, the friend she is tasked to accompany through anything.

Like Ishiguro’s previous novels, there’s more to this synopsis than meets the eye. But unlike The Remains of the Day and Never Let Me Go, Klara and the Sun handles its mysteries a bit more clunkily. Reveals are not quite as potent as I’ve read from Ishiguro’s work, and some aspects of the novel’s alternate world feel contrived rather than believable. I think, with this novel, Ishiguro’s conventions of pacing and mystery became more visible, diminishing the sense of suspense that has been his strength.

Possibly my favorite part of this novel was Klara’s internal monologue. Her straightforward and innocent discoveries and confusions are completely endearing, and they end up reflecting more on the faults and successes of the humans around her than on Klara herself. The narration reads like an authentic representation of an AI’s thought patterns, even though that authentic representation can never, in reality, exist.

The Remains of the Day, Never Let Me Go, and Klara and the Sun are all available for checkout from the Galesburg Public Library.