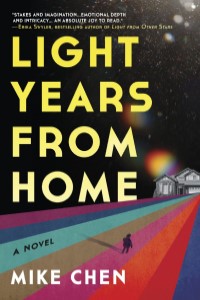 From the publisher: Every family has issues. Most can’t blame them on extraterrestrials. The perfect combination of action, imagination and heart, Light Years from Home is a touching drama about a challenge as difficult as saving the galaxy: making peace with your family…and yourself.

Light Years from Home is a family novel disguised as science fiction, or the other way around. Jakob is intelligent, like his two sisters, but a screw up. He cheats on schoolwork and has no purpose in life. Then, he is abducted by aliens and pulled into a galactic war, and he finds his purpose in life. When he comes into possession of some intel that could change the war, he drops by Earth to regroup. Fifteen years have passed. He father, who never got over Jakob’s disappearance, is dead – drowned, searching for Jakob. His mother has dementia. His therapist sister’s life revolves around their mother and her online game playing with the ex-husband she cheated on. His other sister has devoted her life to the pursuit of aliens.

This family always had issues. Now they have Big Issues. The siblings fight. Mom doesn’t recognize her youngest daughter anymore. There is a lot of resentment and anger. All Jakob can think about is saving the world; his twin Kass on the other hand is convinced he is mentally ill. (The author does a good job of making us wonder if he is in fact mentally ill, and all this galactic war stuff is in his head.)

I found the first part of the book slow moving, but the payoff at the end is worth it. The book had a bit of an X-Files feel to it. (The FBI does appear, but the agent is mostly in the Scully-without-Mulder mold.) I almost feel I would enjoy this book more a second time, maybe on audio.

Illinoisans: there is a funny reference that gets no further explanation. Jakob was always irresponsible and would disappear for days at time. “One time, she got an email from him from goddamn Moline, Illinois, because of some strange whim of his.” (p, 85 of the advance reader copy). Ha!

Light Years from Home reminded me a bit of Jo Walton’s Among Others. Among Others shows what happens after the main character fights a tremendous battle with her sorcerer mother in which her sister dies, and how she copes with her nonmagical father and going to a new school. The big action is off screen; the heart of both books is family relations and finding yourself.

I read an advance reader copy of Light Years from Home.

Light Years From Home is available for checkout from the Galesburg Public Library in print, on audio, and as an ebook.