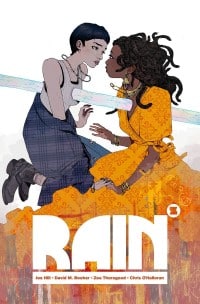 On a seemingly normal August day in Boulder, Colorado, the skies are clear and Honeysuckle Speck couldn’t be happier. She’s finally moving in with her girlfriend Yolanda. But their world is literally torn apart when dark clouds roll in and release a downpour of nails—splinters of bright crystal that shred the skin of anyone not safely under cover.

Rain makes vivid this escalating apocalyptic event, as the deluge of nails spreads across the country and around the world, threatening everything young lovers Honeysuckle and Yolanda hold dear. 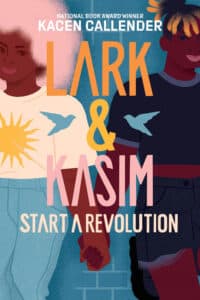 Lark Winters wants to be a writer, and for now that means posting on their social media accounts––anything to build their platform. When former best friend Kasim accidentally posts a thread on Lark’s Twitter declaring his love for a secret, unrequited crush, Lark’s tweets are suddenly the talk of the school—and beyond. To protect Kasim, Lark decides to take the fall, pretending they accidentally posted the thread in reference to another classmate. It seems like a great idea: Lark gets closer to their crush, Kasim keeps his privacy, and Lark’s social media stats explode. But living a lie takes a toll—as does the judgment of thousands of Internet strangers. Lark tries their best to be perfect at all costs, but nothing seems good enough for the anonymous hordes––or for Kasim, who is growing closer to Lark, just like it used to be between them . . .

In the end, Lark must embrace their right to their messy emotions and learn how to be in love. 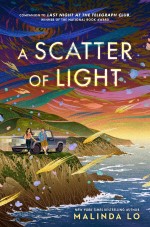 A SCATTER OF LIGHT by Malinda Lo

Aria Tang West was looking forward to a summer on Martha’s Vineyard with her best friends–one last round of sand and sun before college. But after a graduation party goes wrong, Aria’s parents exile her to California to stay with her grandmother, artist Joan West.Aria expects boredom, but what she finds is Steph Nichols, her grandmother’s gardener. Soon, Aria is second-guessing who she is and what she wants to be, and a summer that once seemed lost becomes unforgettable–for Aria, her family, and the working-class queer community Steph introduces her to. It’s the kind of summer that changes a life forever. 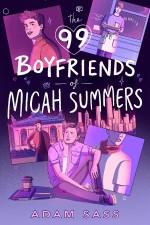 Micah is rich, dreamy, and charming. As the “Prince of Chicago,”—the son of local celebrity sports radio host known as the King of Chicago—he has everything going for him. Unfortunately, he’s also the prince of imaginary meet-cutes, since he’s too nervous to actually ask boys out.

Instead, Micah draws each crush to share on Instagram with a post about their imaginary dates. Ninety-nine “boyfriends” later, his account is hugely popular, and everyone is eagerly awaiting Boy 100. So is Micah. He’s determined that Boy 100 will be different. This time, Micah will sweep the boy off his feet, for real!

So when Micah flirts with a hot boy on the L who’s wearing a vegan leather jacket and lugging a ton of library books, he is sure this is Boy 100. But right before he can make his move and ask for the boy’s number, the guy rushes off the train, leaving behind his pumpkin-embroidered jacket. The jacket holds clues to the boy’s identity, so Micah and his friends set off on a quest to return it. Along the way, Micah will discover that the best relationships aren’t fairy tales. In fact, the perfect fit—and true love—might be closer than he thinks. 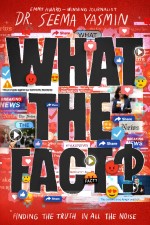 WHAT THE FACT? DEBUNKING DISINFORMATION TO DETANGLE TRUTH by Seema Yasmin

What is a fact? What are reliable sources? What is news? What is fake news? How can anyone make sense of it anymore? Well, we have to. As conspiracy theories and online hoaxes increasingly become a part of our national discourse and “truth” itself is being questioned, it has never been more vital to build the discernment necessary to tell fact from fiction, and media literacy has never been more vital.

In this accessibly-written guide, Dr. Seema Yasmin, an award-winning journalist, scientist, medical professional, and professor, traces the spread of misinformation and disinformation through our fast-moving media landscape and teaches young readers the skills that will help them identify and counter poorly-sourced clickbait and misleading headlines. 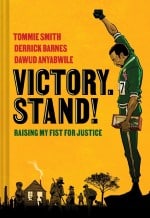 VICTORY. STAND! RAISING MY FIST FOR JUSTICE by Tommie Smith

On October 16, 1968, during the medal ceremony at the Mexico City Olympics, Tommie Smith, the gold medal winner in the 200-meter sprint, and John Carlos, the bronze medal winner, stood on the podium in black socks and raised their black-gloved fists to protest racial injustice inflicted upon African Americans. Both men were forced to leave the Olympics, received death threats, and faced ostracism and continuing economic hardships.

In his first-ever memoir for young readers, Tommie Smith looks back on his childhood growing up in rural Texas through to his stellar athletic career, culminating in his historic victory and Olympic podium protest. Cowritten with Newbery Honor and Coretta Scott King Author Honor recipient Derrick Barnes and illustrated with bold and muscular artwork from Emmy Award–winning illustrator Dawud Anyabwile, Victory. Stand! paints a stirring portrait of an iconic moment in Olympic history that still resonates today.