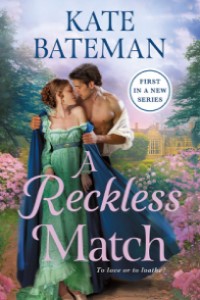 From the publisher: Can lifelong hate turn to true love? Meet the Davies and Montgomery families – two households locked in an ancient feud, destined to be on opposing sides forever. Until now…

A Reckless Match is the first in new historical romance series set during the Regency period, about feuding families and childhood enemies who grow up to be lovers. A good enemies to lovers story is often a lot of fun, and clearly the author thinks so.

Maddie and Gryff have known each other since childhood, so there is no “meet cute,” but there is a cute intro all the same. Every year on the spring equinox, a member of the Montgomery family and a member of the Davies family must meet on a bridge dividing their lands. Although only ten miles apart, one estate lies in England and one in Wales. The families have fought for so long that no one remembers what the fight was about. If a representative fails to show, ownership of their lands will transfer to the other family. In March of 1815, it is Maddie and Gryff who keep the appointment.

The meeting on the bridge leads to adventure in a shared underground network of caves, an adventure that includes smugglers and customs agents, found treasure and mortal peril. Maddie is a bluestocking being pressured to marry a much older man to get her family out of its secret debt; Gryff is back from the war with Napoleon and dealing with guilt and a little PTSD. They are both warm and likable, and they make an engaging couple.

There’s no doubt how their story will end, but it’s fun to see their relationship play out. There was a little too much premarital sex for my liking, but that seems to be the way of historical romance these days. (At least our hero and heroine are equals, and if she got pregnant he would be expected to marry her and all would be well.) They both suffer some (perhaps not too believable) doubts about the other’s feelings, but this element of the story is not prolonged. There are a lot of side characters waiting in the wings for their own books. (For my taste they were a little too featured before their proper turns; still, I’m sure I will read book two when it is published.

If you enjoy historical romance, especially stories featuring old friends and foes, you may enjoy A Reckless Match. I read an advance reader copy of A Reckless Match from Netgalley. The library also owns author Bateman’s first series, Bow Street Bachelors. The first book is This Earl of Mine.

A Reckless Match will be available for checkout from the Galesburg Public Library when it is released in September.