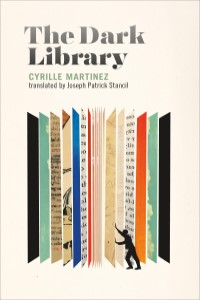 From the publisher: Libraries are magical places. But what if they’re even more magical than we know? In Cyrille Martinez’s library, the books are alive: not just their ideas or their stories, but the books themselves. Meet the Angry Young Book, who has strong opinions about who reads what and why. He’s tired of people reading bestsellers, so he places himself on the desks of those who might appreciate him. Meet the Old Historian who mysteriously vanished from the stacks. Meet the Blue Librarian, the Mauve Librarian, the Yellow Librarian, and spend a day with the Red Librarian trying to banish coffee cups and laptops. Then one day there are no empty desks anywhere in the Great Library.

Cyrille Martinez is very obviously writing from the perspective of a librarian who has heard every critique of libraries that has ever been carelessly flung out into the ether. We’ve heard it all. E-readers are going to kill books! Who needs librarians when we have Google? One day, perhaps, the word library will be deemed outdated. It will be replaced by another. I prefer not to be around to hear such a thing. Such is one of the very first laments in this novel.

The Great Library is sectioned off into four towers, each containing different “genres” of books. There is, of course, a Reading Room, where people sit at desks–scratch that; desk is another word whose meaning is contested. Martinez’s narrator points out these are no longer desks, they’re workspaces. And while it’s still referred to as a Reading Room, no one is actually reading. The people who are here are here for the internet. You speak to them about the 14 million printed documents at their disposal, to remind them that the library is, to begin with, and above all, a collection, and they respond, That’s nice… and by the way, when will the internet connection be restored? (92).

Martinez continues with the question of word choice. What do we call the Readers now if they’re not reading? Users? Patrons? Sojourners? Squatters? Books change, libraries change, and there’s no reason for the readers not to change, one of the librarians quips (98). But then the library enacts a policy that requires people to read at least one item while they’re in the Reading Room, which ultimately led to a 90 percent decrease in Reading Room usage.

From the perspective of The Angry Young Book, we learn that those who are reading read only the most popular books, the bestsellers, so he sets himself in the workspace of readers in the hopes that they’ll give him a chance. He bemoans the act of weeding the collection, calling it an assassination of books while the director lectures him on the importance of collection maintenance.

Then comes another perspective switch, and we hear from the Red Librarian. Suddenly, the Reading Room is packed full of “Contractual Readers” who are there to scan every single book in the library. They end up genuinely enjoying their work, even trying to check some of the items out to finish reading them at home. The Small Wounded Book becomes so popular that the librarian tries a little reader’s advisory and suggests a Feel Good Read while one Contractual Reader waits for The Small Wounded Book, and here we hear a critique of pop lit: You gave me a non-book… It’s the story of a book that, given the choice, would have preferred to be a film or television series… Reading is considered a shameful thing, a painful thing that we would like to get rid of in favour of content that requires less effort (139).

The Dark Library is a quick read, although I would like to know what non-librarians think of it. Martinez jumps from ideas as though he believes lingering on one for too long will cause the reader to drop the book, but some could have used a little more attention. It also sometimes comes off a little old-man-shakes-fist-at-cloud; these darn kids and their fancy internet machines, don’t they know that reading a book with actual paper pages is good for them? Bibliophiles will get a kick out of it, at least, but as someone who’s worked in libraries for 12 years at this point, arguments and musings like this are tired and overdone. Overall, I’d recommend this to anyone who genuinely loves reading, but you’re not going to miss out on anything groundbreaking if you pass.

The Dark Library is available for checkout at the Galesburg Public Library.