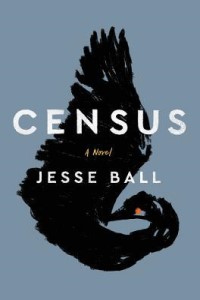 From the publisher: When a widower receives notice from a doctor that he doesn’t have long left to live, he is struck by the question of who will care for his adult son—a son whom he fiercely loves, a boy with Down syndrome. With no recourse in mind, and with a desire to see the country on one last trip, the man signs up as a census taker for a mysterious governmental bureau and leaves town with his son.

Jesse Ball writes, as a prologue to his novel Census, of his late brother, Abram, who had Down’s Syndrome. Ball explains that his novel Census is, in part, an effort to create a character very like his brother, to render a relationship very like the one he had with his brother, which was almost that of a father and son.

In Census, it is the father character who will die before his time. Knowing of his imminent death by an unnamed illness, the main character decides to enroll as a census taker to make memories with his son and show him the villages beyond theirs. The plan is simple: when he feels that his death is upon him, he will send his son home on a train to live with their close friends.

In short chapters, the deep love and thoughtfulness between a nurturing father and his curious, outgoing son unfolds. The villages of their country are labeled A, B, C, through to Z, and they travel through them and count many interesting people. The story reads nearly like a fable: the premise is simple and beautiful, like the world it’s born from. The people the pair meet are referred to only by what they do, and all of the characters are nameless. The musings of the father are thoughtful without being overly sentimental: they carry great weight.

If you are looking for a quick read, one that will grip you early and keep you with it, then I’d recommend picking up Census. I can imagine the simplicity of the language could be droll to some readers, but to me it offered a chance to slow down and examine the depth of the relationships we take part in everyday—ones we can be quick to take for granted but ultimately need the most.

Census is available for checkout from the Galesburg Public Library