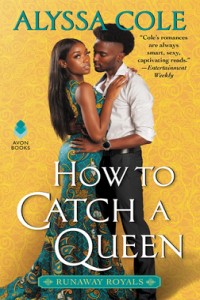 From the publisher: When Shanti Mohapi weds the king of Njaza, her dream of becoming a queen finally comes true. But it’s nothing like she imagined. Shanti and her husband may share an immediate and powerful attraction, but her subjects see her as an outsider, and everything she was taught about being the perfect wife goes disastrously wrong.

A king must rule with an iron fist, and newly crowned King Sanyu was born perfectly fitted for the gauntlet, even if he wishes he weren’t. He agrees to take a wife as is required of him, though he doesn’t expect to actually fall in love. Even more vexing? His beguiling new queen seems to have the answers to his country’s problems—except no one will listen to her.

Let me preface this review by saying that romance is *not* my genre of choice. I have discovered this especially pertains to contemporary romance, regardless of whether it’s falling for your best friend or just living with your wife in Paris. If there’s a historical or paranormal angle, I tend to be more interested. When I saw the incredible cover for Alyssa Cole’s How to Catch a Queen, I was immediately intrigued, and the description lured me in further. I had also read Cole’s When No One is Watching last January and really enjoyed it, even though it went off the rails at the end, so I was willing to give this one a try.

This is the first book in a new series (Runaway Royals) that takes place in the established nobility filled world of Cole’s earlier series, Reluctant Royals. Goodreads assured me that I could jump into the new series with no prior knowledge of the first one, although main characters from the first series are very much referenced and feature as secondary characters. It was the interactions with these characters, in group texts of varied royals, that I enjoyed more than the actual romantic focus of the book. There’s a lot of world building, with fictional countries following broad strokes of history (e.g. the European invasion and colonization of Africa) without being constrained to actual events. I was also pleased to see the author had a sense of humor, with lines like ‘Two hours later, he fell asleep with the videos still autoplaying, and dreamt of being deposed by an aardvark.’

As a whole I enjoyed this book, although similarly to When No One is Watching, I felt that the ending was a bit of a let down, especially the HEA (Happily Ever After) epilogue and fate of the main villain. Again, not a romance reader here. I give this one a solid 3 out of 5 stars. I did enjoy the ride enough to put the first Reluctant Royals book, A Princess in Theory, on my to-be-read list, as well as the next book in the Runaway Royals series, How to Find a Princess.

How to Catch a Queen is available through Interlibrary Loan. A Princess in Theory and How to Find a Princess are both available in paperback at Galesburg Public Library.