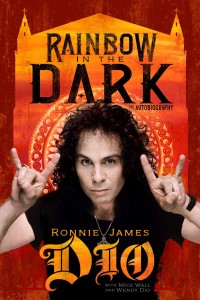 From the publisher: The long-awaited autobiography by one of heavy metal’s most revered icons, treasured vocalists, and front man for three legendary bands —Rainbow, Black Sabbath, and Dio.

Rainbow in the Dark is the autobiography of the late, great metal singer Ronnie James Dio, and covers his early life from his childhood through his long journey to rock & roll success, reaching the top of the music business mountain first with Ritchie Blackmore’s Rainbow, again with Black Sabbath, and finally with his own band Dio.

It might seem strange that Dio’s autobiography came out in 2021 when he died of stomach cancer way back in 2010. In the book’s preface, his widow Wendy Dio explains that Ronnie had been working on his memoirs before his cancer diagnosis, but had to slow his writing pace and switch to writing more notes to plot out the rest of the book, which she had to finish after his death. Understandably, it took her some time to grieve before she could resume working on the book, which was finished by gathering his words from various notes, interviews, and other materials over the years. Throughout the book Wendy includes her own thoughts and explanations on certain subjects, all of which are clearly marked to distinguish her words from Ronnie’s.

This book focuses more on Dio’s early life, culminating in his headlining performance at Madison Square Garden in 1986. It leaves nearly a quarter century of his life story untold, which makes the book feel like Volume 1 of a story that will never have a Volume 2. However, the book is packed full of stories from Ronnie’s early life, from his childhood through his experiences in the 1960s and early 1970s, as well as the success he found in the bands for which he eventually became famous.

Like any rock star’s biography, this book addresses some controversies and feuds from his life. Dio writes about subjects such as his departures from Rainbow and Black Sabbath, disputes with former band members, the challenges he faced as Ozzy Osbourne’s replacement in Black Sabbath and how he tried to handle that, and much more. However, what comes through most clearly in the book is Dio’s passion for his music and his desire to succeed on his own terms, rather than letting his success be defined by anyone else. It makes for a must-read for all fans of his work, and for rock and metal fans in general.

Rainbow in the Dark is available for checkout from the Galesburg Public Library.