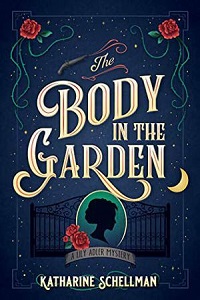 From the publisher: London 1815. Though newly-widowed Lily Adler is returning to a society that frowns on independent women, she is determined to create a meaningful life for herself even without a husband. She’s no stranger to the glittering world of London’s upper crust. At a ball thrown by her oldest friend, Lady Walter, she expects the scandal, gossip, and secrets. What she doesn’t expect is the dead body in Lady Walter’s garden.

Katharine Schellman’s The Body in the Garden is a fun, well-researched cozy mystery set during the Regency era. Main character Lily loved her husband, who left her a young widow. His family convinces her to return to London, hoping she’ll remarry. She is grieving and unsure how to live the rest of her life, reluctant to rejoin the ton. Her husband’s oldest friend, a naval captain, is in London while his ship is repaired, and he naturally becomes her escort and ally.

The author’s note makes the connection between the story and historical facts. She believably adds two people of color to the story – an heiress from the West Indies and the naval captain, who has an Indian mother. The story isn’t original – the helpful street urchins, the gruff but sincere policeman, the members of the upper crust solving a mystery – but the author brings freshness to her telling. There are hints of romance to come in a sequel. The Body in the Garden would make a terrific movie – someone should snap it up in this day of Bridgerton on TV.

The Body in the Garden is available for checkout at the Galesburg Public Library. It is also availble as an ebook and audiobook from Axis 360.