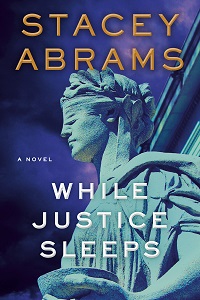 From the publisher: From celebrated national leader and bestselling author Stacey Abrams, While Justice Sleeps is a gripping, complexly plotted thriller set within the halls of the U.S. Supreme Court. Drawing on her astute inside knowledge of the court and political landscape, Stacey Abrams shows herself to be not only a force for good in politics and voter fairness but also a major new talent in suspense fiction.

While Justice Sleeps is an intricately plotted thriller. Sharp and fast paced, it covers a lot of ground. The author clearly knows her way around DC, the federal government, and the Supreme Court. Main character Avery Keene is biracial and has a drug addict mother, allowing Abrams to touch on issues of race and family, addiction and loss. Avery is smart and capable, and she is surrounded by a small cast of interesting side characters.

I did not feel character development was a great strength of this novel. The bad guys especially, while diverse, are pretty standard in their bad guyness. The plot was a little too convoluted for my liking, but that may be partly because I’m just not in the mood to figure things out after a year of Covid-19 pandemic. I can imagine some readers will love all the twists, turns, and puzzles. (I also don’t play chess, and the author leans pretty hard on chess analogies.)

There’s a lot to like here for thriller fans. Recommended for readers of the Da Vinci Code and similar novels, and also for watchers of TV shows like Law & Order. While Justice Sleeps has “movie script” written all over it.

I read an advance reader copy of While Justice Sleeps from Netgalley. The book is scheduled to be released in May 2021, and will be available for checkout at Galesburg Public Library. It will also be available as an ebook.