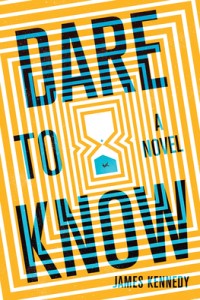 From the publisher: Our narrator is the most talented salesperson at Dare to Know, an enigmatic company that has developed the technology to predict anyone’s death down to the second. Divorced, estranged from his sons, and broke, he’s driven to violate the cardinal rule of the business by forecasting his own death day. The problem: his prediction says he died twenty-three minutes ago. The only person who can confirm its accuracy is Julia, the woman he loved and lost during his rise up the ranks of Dare to Know. As he travels across the country to see her, he’s forced to confront his past, the choices he’s made, and the terrifying truth about the company he works for.

What the heck did I just read? This is one trippy novel. Am I reading the thoughts of a madman, or is the world really coming to an end?

The time is now, or around now, or not too long from now. Using weird math, nonsense queries, giant tomes called The Books of the Dead, particles called thanatons, and staff who know that “To do the math makes the math come true” (p. 11 of the advance reader copy), the company Dare to Know can tell you the exact time and date of your death.

Our narrator has worked for Dare to Know since the beginning. The company is not what it once was. It costs a lot to be told when you will die, and in the early days the company was like an internet startup: its employees were rich, with swanky offices and lots of support staff. But times have changed. The shine of knowing when you are going to die has dimmed a bit. Now our 49-year-old narrator ekes out a living with no admin help, living out of his car half the time, wearing crumpled clothing and always desperate for a sale.

As the story moves forward we revisit his past. The genius friend he met at eighth grade physics camp. His fear of the Beatles. The love of his life he met in college. The ex-wife he settled for. The sons he hardly knows. An aversion to all things computer once he started predicting death – “the way computers do math feels like chewing tinfoil.” (p. 47) His musings become increasingly unhinged – or do they?

This is a weird book. Very math-y and philosophical. At times almost stream of consciousness but not quite. The math makes no sense. The nonsense questions people are asked, and the nonsense answers they give in return, make no sense. Thanatons – subatomic particles quantum-entangled in human death. (Say what?) “Subjective mathematics” that includes calculations that computers simply can’t perform. A process that is “some combination of math problem and pagan ritual”.  (p. 68)

But I set my skepticism aside, and each time I picked up Dare to Know I felt myself fall into the narrator’s mind, where I was irresistibly compelled to keep reading. The publisher compares Dare to Know to Jeff VanderMeer’s Annihilation, but it reminds me more of Edgar Allen Poe’s Tell-tale Heart, with a bit of Ulysses by James Joyce thrown in. For Illinoisans looking for a local connection, the Cahokia Mounds play a very important role in the narrative.

I recommend Dare to Know for readers who like novels that are way off the beaten path and make you think. I read an advance reader copy of Dare to Know.

Dare to Know will be available for checkout at the Galesburg Public Library in both print and ebook formats when it is published in September. (Or will it. Depends on whether the world comes to an end.)