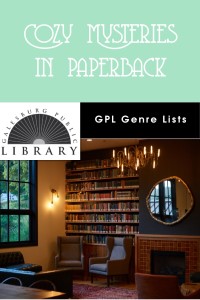 Need some help choosing your next book to read? We’ve put together some lists of popular titles in different genres to help you pick! Each Wednesday we’ll highlight a new genre list. If you’re looking for something different, visit the Readers Advisory page for more help! This week, we’re highlighting the Cozy Mysteries genre list. 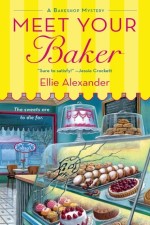 MEET YOUR BAKER (A BAKESHOP MYSTERY #1) by Ellie Alexander

Welcome to Torte-a friendly, small-town family bakeshop where the treats are so good that, sometimes, it’s criminal…

After graduating from culinary school, Juliet Capshaw returns to her quaint hometown of Ashland, Oregon, to heal a broken heart and help her mom at the family bakery. The Oregon Shakespeare Festival is bringing in lots of tourists looking for some crumpets to go with their heroic couplets. But when one of Torte’s customers turns up dead, there’s much ado about murder…

The victim is Nancy Hudson, the festival’s newest board member. A modern-day Lady Macbeth, Nancy has given more than a few actors and artists enough reasons to kill her…but still. The silver lining? Jules’s high school sweetheart, Thomas, is the investigator on the case. His flirtations are as delicious as ever, and Jules can’t help but want to have her cake and eat it too. But will she have her just desserts? Murder might be bad for business, but love is the sweetest treat of all… 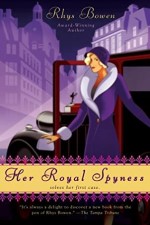 Georgie, aka Lady Victoria Georgiana Charlotte Eugenie, cousin of King George V of England, is penniless and trying to survive on her own as an ordinary person in London in 1932.

So far she has managed to light a fire and boil an egg… She’s gate-crashed a wedding… She’s making money by secretly cleaning houses… And she’s been asked to spy for Her Majesty the Queen.

Everything seems to be going swimmingly until she finds a body in her bathtub… and someone is definitely trying to kill her. 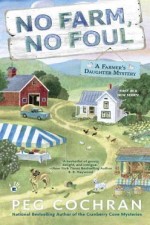 NO FARM, NO FOUL (FARMER’S DAUGHTER MYSTERY #1) by Peg Cochran

On her blog, The Farmer’s Daughter, Shelby McDonald is growing her audience as she posts recipes, gardening tips, and her experiences raising two kids and running Love Blossom Farm in the small western Michigan town of Lovett.

Working the farm is demanding but peaceful—until that peace is shattered when the minister’s wife is murdered on Shelby’s property during a fund-raiser for a local church. But the manure really hits the fan when Shelby’s good friend veterinarian Kelly Thacker emerges as the prime suspect. Shelby decides to dig in and find the murderer by herself. As more suspects crop up, she’ll have to move fast—before someone else buys the farm… 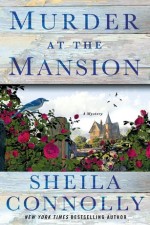 MURDER AT THE MANSION (VICTORIAN VILLAGE MYSTERIES #1) by Sheila Connolly

Katherine Hamilton’s goal in high school was to escape from her dead-end hometown of Asheford, Maryland. Fifteen years later she’s got a degree in hospitality management and a great job supervising every aspect of the day-to-day operations of a high-end boutique hotel on the Baltimore waterfront. Then her high school best friend asks her to come talk with the town leaders of Asheford, but she won’t say why. Kate can’t cut her last link to her past, so she agrees to make the short trip across the state to Asheford.

Once Kate arrives, the town council members reveal that their town is on the verge of going bankrupt, and they’ve decided that Kate’s skills and knowledge make her the perfect person to cure all their ills. The town has used its last available funds to buy the huge Victorian mansion just outside of town, hoping to use it to attract some of the tourists who travel to visit the nearby Civil War battle sites. Kate has less-than-fond memories of the mansion, for personal reasons, but to make matters worse, the only person who has presented a possible alternate plan is Cordelia Walker–Kate’s high school nemesis, who had a hand in driving Kate away from Asheford so many years.

But a few days later Kate receives a call from the police–Cordelia has been found dead on the mansion property, and Kate is all-but certain that her name is high on the suspect list. She finds herself juggling the murder investigation and her growing fascination with the magnificent old house that turns out to be full of long-hidden mysteries itself. Kate knows she must clear her name and save her town–before she ends up behind bars. 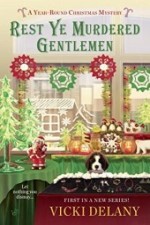 As the owner of Mrs. Claus’s Treasures, Merry Wilkinson knows how to decorate homes for the holidays. That’s why she thinks her float in the semi-annual Santa Claus parade is a shoo-in for best in show. But when the tractor pulling Merry’s float is sabotaged, she has to face facts: there’s a Scrooge in Christmas Town.

Merry isn’t ready to point fingers, especially with a journalist in town writing a puff piece about Rudolph’s Christmas spirit. But when she stumbles upon the reporter’s body on a late night dog walk—and police suspect he was poisoned by a gingerbread cookie crafted by her best friend, Vicky—Merry will have to put down the jingle bells and figure out who’s really been grinching about town, before Vicky ends up on Santa’s naughty list… 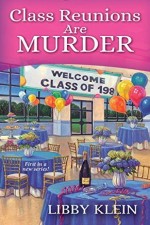 Newly widowed and stuck in a middle-aged funk, Poppy has been running on cookies, infomercials, and one-sided chats with her cat for months. There’s no way on earth she’s attending her twenty-five-year class reunion–especially after receiving a very bizarre letter from Barbie, the popular cheerleader who taunted her all through high school. At least, not until Poppy’s best friend practically drags her to the event…

Using the dreaded homecoming as an excuse to visit her eccentric Aunt Ginny, Poppy vows to leave Cape May with pride and Spanx intact. Too bad Barbie is still the queen of mean at the reunion. And worse, that her dead body is lying right in front of Poppy’s old locker. Singled out as the killer, it’s up to Poppy to confront her past and clear her name. But between protecting her aunt from disaster and tackling a gluten-free diet, can Poppy crack the case before she’s voted Most Likely to Die by the murderer?

View more from the Cozy Mysteries genre list, or see other genre lists we have available.