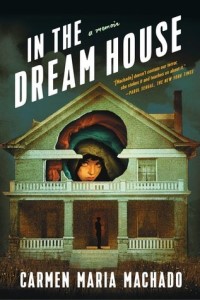 From the publisher: In the Dream House is Carmen Maria Machado’s engrossing and wildly innovative account of a relationship gone bad, and a bold dissection of the mechanisms and cultural representations of psychological abuse. Tracing the full arc of a harrowing relationship with a charismatic but volatile woman, Machado struggles to make sense of how what happened to her shaped the person she was becoming.

And it’s that struggle that gives the book its original structure: each chapter is driven by its own narrative trope―the haunted house, erotica, the bildungsroman―through which Machado holds the events up to the light and examines them from different angles. She looks back at her religious adolescence, unpacks the stereotype of lesbian relationships as safe and utopian, and widens the view with essayistic explorations of the history and reality of abuse in queer relationships.

Machado’s dire narrative is leavened with her characteristic wit, playfulness, and openness to inquiry. She casts a critical eye over legal proceedings, fairy tales, Star Trek, and Disney villains, as well as iconic works of film and fiction. The result is a wrenching, riveting book that explodes our ideas about what a memoir can do and be.

Carmen Maria Machado, in her first memoir In the Dream House, invokes traditional fairy tale tropes, queer theory, and narrative memoir to detail her experiences in an abusive relationship. Oscillating between “I” and “you,” Machado plays on the tangles of selfhood and otherhood that arise when one is abused by someone so close to them.

Machado brings attention to the silence around abusive relationships that involve people who are LGBTQ+. The lack of representation of what abuse can look like in queer relationships contributes to the lack of resources for LGBTQ+ people who experience abuse at the hands of their partner.

Machado’s abusive partner is a seemingly-demure white woman: certainly not the stereotype of an abuser. The image of the straight abusive relationship, so patriarchal, is often mapped onto queer relationships in ways that cover up the truth. But abuse is dealt by anyone: it happens to anyone. And when it is invisible, it doesn’t stop. So Machado asks us to take another, deeper look.

Machado welcomes us deep into her own mind, even when she is driven to the mind’s extremes. She offers a new, more complex look into entrenched narratives of abuse by offering up her own narrative alongside older ones, revealing that abuse is as ancient in our culture as our fairy tales.

With In the Dream House, Machado asks us to pause and challenge the stories we keep on rewriting. To turn the page and finally read out a story that’s waited to be written there, all this time.

In the Dream House is available for checkout from the Galesburg Public Library.