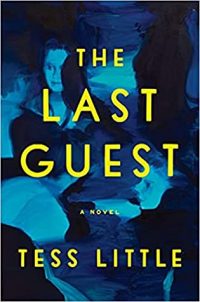 From the publisher: A glamorous birthday dinner in the Hollywood Hills ends with the famous host dead and every guest under suspicion in this dark, cinematic suspense debut.

The Last Guest is a different kind of psychological thriller than most I’ve read lately. It’s not so much about “who done it” as “what happened” and “what led to this.” It’s about the unraveling of relationships, the consequences of one’s actions, and the fakeness of Hollywood.

I’ve seen The Last Guest described as a locked room mystery, which I think will, unfortunately, lure in some readers who won’t like it. While the murderer (if the party host was indeed murdered) has to be one of the party guests, they disperse quickly and are not exactly brought back together for a Big Reveal.

There are multiple threads set at different times, and the time shifts are abrupt. This was confusing in a good way, adding to my sense of disorientation as a reader. An octopus is a prominent figure in the plot, and she adds an air of creepiness and otherworldliness as the plot spins out. This is not a novel of a lot of action; you have to buy into the characters and their motivation, so you stay interested in how it all plays out. I read it on a travel day and was engrossed.

The novel is in three acts like a play. I liked that by the end the author had not Explained All. Hints were dropped about past events, and explanations were likewise hinted at, but every long-winded detail was not necessary.

The Last Guest is not a super original story with a cool twist. It’s a character and relationship study, and I liked how it was strung together. There’s a lesson here: don’t invite a bunch of people who don’t like you to a big birthday party.

I read an advance reader copy of The Last Guest.

The Last Guest is available for checkout from the Galesburg Public Library in print and ebook formats.