Are your kiddos looking for something new to read? Here are six recent titles currently available in the Children’s Room at the Galesburg Public Library. If you see something that interests you, give us a call or visit the catalog to put one on hold!

The bold, bright colors of India leap right off the page in this fresh and funny picture book retelling (with a twist) of how Ganesha came to help write the epic poem of Hindu literature, the Mahabharata. Ganesha is just like any other kid, except that he has the head of an elephant and rides around on a magical mouse. And he loves sweets, especially the traditional dessert laddoo. But when Ganesha insists on biting into a super jumbo jawbreaker laddoo, his tusk breaks off! Ganesha is terribly upset, but with the help of the wise poet Vyasa, and his friend Mr. Mouse, he learns that what seems broken can actually be quite useful after all. With vibrant, graphic illustrations, expressive characters, and offbeat humor, this is a wonderfully inventive rendition of a classic tale.

Mr. Watson has 456 chickens in the sink, on the bed, in the bread box. When his partner, Mr. Nelson, threatens to leave, Mr. Watson takes his chickens to town to sell only for them to escape! Young readers will follow Mr. Watson all around town as he gathers up his chickens. But, when they’re all rounded up, does he have the heart to sell them? Does a different fate await these chickens?

This quirky, irresistible book is full of read-aloud fun with its onomatopoeia, rollicking rhythm, and familiar refrains and ends with a touch of sweetness. It has all the makings of a classic, with a farm theme, hilarious refrains, and a familiar narrative structure that unfolds in threes. Librarians, teachers, and parents looking for a new book that feels traditional will love sharing this book with children.

NOBODY LIKES A GOBLIN by Ben Hatke

Goblin, a cheerful little homebody, lives in a cosy, rat-infested dungeon, with his only friend, Skeleton. Every day, Goblin and Skeleton play with the treasure in their dungeon. But one day, a gang of “heroic” adventurers bursts in. These marauders trash the place, steal all the treasure, and make off with Skeleton—leaving Goblin all alone.

It’s up to Goblin to save the day. But first he’s going to have to leave the dungeon and find out how the rest of the world feels about goblins. 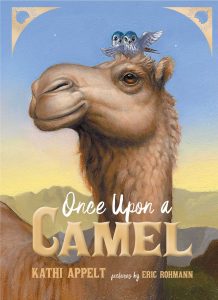 ONCE UPON A CAMEL by Kathi Appelt

Zada is a camel with a treasure trove of stories to tell. She’s won camel races for the royal Pasha of Smyrna, crossed treacherous oceans to new land, led army missions with her best camel friend by her side, and outsmarted a far too pompous mountain lion.

But those stories were from before. Now, Zada wanders the desert as the last camel in Texas. But she’s not alone. Two tiny kestrel chicks are nestled in the fluff of fur between her ears—kee-killy-keeing for their missing parents—and a dust storm the size of a mountain is taking Zada on one more grand adventure. And it could lead to this achy old camel’s most brilliant story yet. 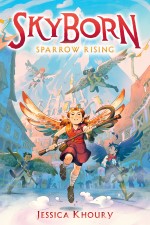 In the Clandoms, everyone is born with wings, with tight-knit communities formed around bird types: Jay, Falcon, Crow.

Ellie Meadows dreams of growing up to join the Goldwings — the famed knights who defend all the people of the Clandoms. It was a Goldwing, after all, who saved her life on that terrible day her parents were killed. There’s just one problem: Ellie is a Sparrow, and the Goldwings are almost invariably picked from the higher clans like Eagles and Ospreys. This rigid hierarchy means that Ellie is destined to become a farmer.

Determined to honor her parents’ memories and prove herself worthy of the Goldwings, Ellie sets out on her own for the capital. But her journey will be dangerous. Foul creatures called gargols lurk behind every cloud, ready to slay anyone unlucky enough to be caught outside in a storm — just as Ellie’s family was.

Soon her path intertwines with a colorful band of fellow outcasts, each with their own aspirations… and their own secrets. Ellie’s new friends offer not just roadside companionship. They’ll challenge her ideas of right, wrong, and what truly makes a hero. 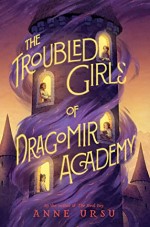 THE TROUBLED GIRLS OF DRAGOMIR ACADEMY by Anne Ursu

If no one notices Marya Lupu, it is likely because of her brother, Luka. And that’s because of what everyone knows: that Luka is destined to become a sorcerer.

The Lupus might be from a small village far from the capital city of Illyria, but that doesn’t matter. Every young boy born in in the kingdom holds the potential for the rare ability to wield magic, to protect the country from the terrifying force known only as the Dread.

For all the hopes the family has for Luka, no one has any for Marya, who can never seem to do anything right. But even so, no one is prepared for the day that the sorcerers finally arrive to test Luka for magical ability, and Marya makes a terrible mistake. Nor the day after, when the Lupus receive a letter from a place called Dragomir Academy–a mysterious school for wayward young girls. Girls like Marya.

Soon she is a hundred miles from home, in a strange and unfamiliar place, surrounded by girls she’s never met. Dragomir Academy promises Marya and her classmates a chance to make something of themselves in service to one of the country’s powerful sorcerers. But as they learn how to fit into a world with no place for them, they begin to discover things about the magic the men of their country wield, as well as the Dread itself–things that threaten the precarious balance upon which Illyria is built.