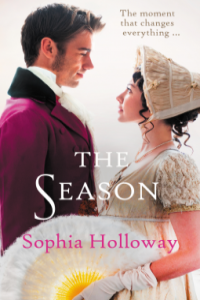 From the publisher: Henrietta Gaydon is making her debut in London society for the Season, but her popularity and apparent ease disguises the fact that she is out of her depth and that she dreads the objective of finding a husband. She longs for home, her father and Lord Henfield, who she has always treated as an older brother. Charles Henfield stopped thinking of Henrietta like a sister when she was sixteen. And he is determined to try his luck with her in London. Mistakes and misunderstandings, the complication of a feud between mamas, and Henrietta’s no longer fraternal feelings for Henfield, all conspire to make this a Season to remember.

Main character Henrietta is young and sheltered, but she is sensible and a good conversationalist who has benefitted from her close relationship with her father. Her father’s godson Charles has long treated her as a sister, but although his feelings for her are now romantic, he does not want to deprive her of the chance to widen her circle of acquaintances through a Season in London. So off she goes to stay with her aunt and cousin, and Charles initially stays behind in the country.

Henrietta is both pretty and less silly than many of the other young women coming out, and she proves to be popular with the young men seeking brides. Henrietta’s behavior and that of her suitors is believable. Eventually, Charles, with her father’s approval, makes his way to London and Henrietta. There are no Big Misunderstandings and no jealous cousin undermining Henrietta. Her aunt is determined to see both Henrietta and her own daughter well matched. I found it restful to sit back and watch the events play out without worrying about any engineered (and unbelievable) plot twists. I knew from page 1 that the happily ever afters would arrive in their time.

The Season is a sweet, old-fashioned romance and comedy of manners. It’s slow moving and true to the time period of the Regency during England. There’s no sex or bad language. Some readers might say nothing happens. If you’ve read Jane Austen’s novels and feel like nothing happens, you probably won’t enjoy The Season. But if you do enjoy books by Jane Austen and Georgette Heyer, you probably will enjoy The Season.

The Season is scheduled to be published in June, and it will be in the Galesburg Public Library’s collection.