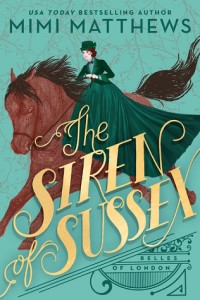 From the publisher: Victorian high society’s most daring equestrienne finds love and an unexpected ally in her fight for independence in the strong arms of London’s most sought after and devastatingly handsome half-Indian tailor.

I’m a big fan of Mimi Matthews, who began her fiction career by self-publishing romance novels set during the Victorian and Regency periods. She has now caught the attention of traditional publishing, and The Siren of Sussex is her first book with Berkley. Matthews is also a historian, and her books are ruthlessly researched. She may stretch a likely outcome, but her characters follow the behavioral standards of the day.

I have read all of the author’s works, and The Siren of Sussex was a little slow starting for me. Matthews has set up a reasonable romance between a gentleman’s daughter who needs to find a husband and a half-English, half-Indian tailor trying to make his name and his business as a designer of women’s gowns. The older sister of main character Evie threw her entire family on a path to nonrespectability by running away with her lover, the son of a baronet who would not let  his heir marry a mere gentleman’s daughter. Evie is in London trying to make a splash with her riding skills while wearing remarkable riding habits. She wants to earn respect so that she and her younger sisters can make decent marriages. But her plans change when she falls in love with the tailor who makes her habits.

The book is honest about the obstacles to the relationship. Tailor Ahmad Malik knows he is at the mercy and whims of his rich and spoiled clients. Evie must navigate societal restraints around her sister’s actions. Fortunately, a fairy godmother rich uncle exists to supply funds and respectability, and Evie makes some good friends who will no doubt feature in future titles in the Belles of London series. The happy-ever-after for Evie and Ahmad slightly strains credulity, but the author sells it.

If you love well-written, historically accurate romance novels that address social issues and spotlight relationships of real feeling, please discover Mimi Matthews if you have not already done so. I read an advance reader copy of The Siren of Sussex from Netgalley, and the Galesburg Public Library will own it once it is released on January 11. The library already owns many of her other titles, including The Matrimonial Advertisement, the first book in the Parish Orphans of Devon series.

The Siren of Sussex will be available for checkout from the Galesburg Public Library when it is released in January 2022.