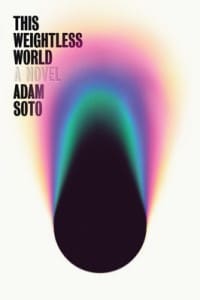 From the publisher: From the streets of gentrified Chicago, to the tech boom corridors of Silicon Valley, This Weightless World follows a revolving cast of characters after alien contact upends their lives.

I do not readily pick up science fiction, but This Weightless World by Adam Soto brings new depths to the alien contact trope.

Though the novel is kick-started by contact from an extraterrestrial source, This Weightless World is very of-Earth. It’s a book rooted deeply in its characters: protagonist Sevi, his girlfriend Ramona, and his cello student Eason. When the alien source from the planet Omni falls silent shortly after starting, Sevi, Ramona, and Eason are left to process the hopes and doubts that the mysterious call made way for.

The novel uses its alien silence as a kind of mirror toward Earth. How does Earth begin to represent itself to an alien world when human inequalities ring so clearly? Why should alien life care about a planet that doesn’t take care of its own—with the Earth as finite as it is, with unchecked injustices ongoing? The book poses many questions, letting the reader feel a part of the novel’s conversation. Through incredibly believable characters, this novel makes the problems that sometimes feel large and faraway intimate.

Soto’s language is beautiful and fine-tuned. Sweeping passages abound as we are taken into the life of the sole occupant of a vessel hurtling through space, as well as the letter correspondences of a passionate scientist. Sevi’s perspective is at once thoughtful and exasperated: he struggles with his complicated family life; his moral discomfort with Ramona’s job for Google; how to prepare his cello student prodigy for the racism sure to meet him in the musical world; as well as the influence of capitalism on his career as a teacher and musician.

Because this novel leaves few stones unturned in the scope of the lives of its main characters, the effect of reading it is that of a collage unfolding. Each chapter of the novel harmonizes with the next to make a syncopated whole. I had the feeling, reaching the end of This Weightless World, of wanting immediately to flip to page one and read it all over again.

If you are looking for a book that challenges your expectation of science fiction with elegance and vibrantly renders the complex lives of its characters, I cannot recommend This Weightless World enough.

This Weightless World is available for checkout from the Galesburg Public Library.